Mental illness is a result of misery, yet still we stigmatise it: Richard Bentall 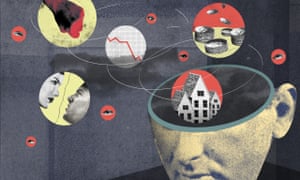 In this excellent article in the Guardian 26th Feb 2016 Christina Patterson provides a deeply insightful report on the current state of mental health as viewed from a psychiatric standpoint.

It matters how we talk and think about mental health. Get it wrong, and people can end up being misled, or even worse, hurt. Last week the BBC ran a well-intentioned season about mental health that, unfortunately, gave a completely lopsided view of psychiatry.

The headline programme was Stephen Fry’s The Not So Secret Life of the Manic Depressive: 10 Years on. Like many mental health professionals, I have enormous respect for Fry’s openness about his mental health. I also feel a personal sympathy towards him: we were both boarders at Uppingham school, Rutland, in the early 70s (though he has no reason to remember me). Our unhappy experiences there have no doubt helped to shape our pathways since, which have converged many years later on a shared interest in mental health – in my case as a clinical psychologist and researcher.

The BBC focused on an extreme biological approach to psychiatry, which is contested by many psychologists and psychiatrists. This approach sees psychiatric problems as discrete brain conditions that are largely genetically determined and barely influenced by the slings and arrows of misfortune. According to this view, psychiatric conditions occur largely out of the blue in individuals who are genetically vulnerable, are uncontrollable and lifelong conditions, and the only appropriate response is therefore to find the right medication. This approach is not supported by recent research, which tells a more complex story.

To begin with, we now know to a level of certainty that diagnoses such as bipolar disorder and schizophrenia are not separate conditions. Patients who experience a mixture of schizophrenia and bipolar symptoms are quite common. Furthermore, large numbers of people manage to live productive lives despite experiencing symptoms of severe psychiatric disorders at some time or another, and without seeking help. There is, for instance, an international network for people who hear voices, many of whom manage perfectly well without psychiatric care.

And the outcomes for severe mental illness are much more variable than was once thought. Research suggests a surprising number of people manage to make full or partial recoveries, even when not taking medication – though recovery means different things for different people. Whereas mental health professionals often think of it in terms of recovery from symptoms, patients more often emphasise the importance of self-esteem, hope for the future, and a valued role in society.

Of course genes play a role in making some people more vulnerable to psychiatric disorder than others, but the formidable advances in molecular genetics over recent years show that the same genes are involved when people are diagnosed with schizophrenia, bipolar disorder, ADHD and even autism.

More importantly hundreds, possibly thousands, of genes are involved, each conferring a tiny increase in risk. Hence, as American genetic researcher Kenneth Kendler says: “The genetic risk for schizophrenia is widely distributed in human populations, so that we all carry some degree of risk.” Everyone reading this article is likely to have some risk genes although, of course, some will have more than others.

The fact that so many genes are involved suggests it is unlikely that studying them will lead to therapeutic breakthroughs anytime soon. (Consider Huntington’s disease, a terrible degenerative neurological condition that is caused by a single dominant gene with a known biological function. Years after this gene was discovered there is still no sign of a medical therapy for this simplest of all the genetic conditions.)

Recent studies have pointed to a wide range of social and environmental factors that increase the risk of mental ill health. These include poverty in childhood, social inequality and early exposure to urban environments; migration and belonging to an ethnic minority (all trending in the wrong direction); early separation from parents; childhood sexual, physical and emotional abuse; and bullying in schools.

In an analysis of all the research on childhood trauma and psychosis, my colleagues and I found that exposure to any of these childhood adversities increased the risk of psychosis approximately three-fold, and those who had multiple traumatic experiences were at much higher risk. In fact, the evidence of a link between childhood misfortune and future psychiatric disorder is about as strong statistically as the link between smoking and lung cancer.

There is also now strong evidence that these kinds of experiences affect brain structure, explaining many of the abnormal neuro-imaging findings that have been reported for psychiatric patients. And of course there are myriad adult adversities that also contribute to mental ill health, including debt, unhappy marriages, excessively demanding work environments and the threat of unemployment. Arguably the biggest cause of human misery is miserable relationships with other people, conducted in miserable circumstances.

Why is all this important? For one thing, many psychiatric patients in Britain feel that services too often ignore their life stories. In the words of Eleanor Longden, a mental health activist, “They always ask what is wrong with you and hardly ever ask what happened to you.” Patients are routinely offered powerful drugs (which clearly have a place but only help some patients), but very rarely the kinds of psychological therapies that may help them come to terms with these kinds of experiences, or even practical advice (debt counselling probably has a place in the treatment of depression, for example).

A narrow medical approach has been extraordinarily unsuccessful, despite what many people assume. Whereas survival and recovery rates for severe physical conditions such as cancer and heart disease have improved dramatically since the second world war, recovery rates for severe mental illness have not shifted at all. Those countries that spend the least on psychiatric services have the best outcomes for severe mental illness, whereas those that spend the most have the highest suicide rates.

To make matters worse, research shows that an exclusively biological approach tends to increase the stigma associated with mental illness. The more that ordinary people think of mental illness as a genetically determined brain disease, and the less they recognise it to be a reaction to unfortunate circumstances, the more they shun psychiatric patients. An exclusively biological approach makes it all too easy to believe that human beings fall into two subspecies: the mentally well and the mentally ill.

Finally, a narrow biomedical approach entirely neglects the public health dimension. Given the evidence, we should be able to dramatically reduce the prevalence of mental health problems by, for example, addressing childhood poverty and inequality, figuring out which aspects of the urban environment are toxic (not surprisingly, living close to a park appears to provide some protection against mental illness), and by aiming to ensure that all our children experience benign childhoods. Some potential influences on mental health (eg the way we organise our schools) have hardly been studied. We cannot create a mentally healthier world if we spend all our time peering into test tubes.

This is not to say that biological approaches have no value, or that research into the genetics and neuroscience of psychiatric disorders has no place. I have been involved in biological studies myself. But portraying mental ill health simply as brain disease can only increase stigma, diverts our attention away from other ways in which we can help patients, stops us from building a healthier world, and encourages in patients alienation, pessimism and a deep despair